The Landscape Of The Social Media In 2020

Let’s take a look at the state of social media in 2020, and you’ll be able to get a grip on the major social media trends to watch out for next year.

According to Sprout Social, advertising spending on social media will increase to $102 billion over the next 12 months. There is no doubt that social media is as much about companies and income as it is about people being linked.

Although Facebook is still a power, the outcome of the Cambridge Analytica fiasco in 2018 continues to echo across the digital marketing landscape. When news emerged that the social media juggernaut had exchanged the personal data of 87 million Facebook users without their permission, NBC estimated that Facebook had a 66% decrease in customer trust.

Shortly after that, the reforms brought on by the GDPR in 2018 made it possible for paid social media marketing activities to become more transparent, and data protection has since become a top priority for most businesses.

In 2020, the U.S. is starting to follow suit, with California, the world’s fifth-largest economy, launching its own privacy act at the beginning of 2020. The California Consumer Privacy Act is the most strict privacy legislation in the United States and will have a domino effect around the country, with many additional state privacy laws set to follow.

Prevalent public mistrust of the media ( especially in this election year) and perceptions of authenticity among celebrities have made many brands change their thinking from trying to achieve the greatest possible reach to concentrating on open, quality interaction. We support community building through constructive interactions with smaller groups. It is done by posting informative and useful content and enabling enthusiastic followers to take care of propagating it.

Despite an increasing sense of mistrust, delivering personalized customer service remains a significant element in the social media marketing strategy for 2020. Online data collection through behavioural monitoring is therefore crucial, and large-scale, one-on-one interactions that become the best opportunity for marketers to do so.

Live Streaming And Stories Are Going To Take Over

The growth of the Stories format will be one of the main trends in social media in 2020. Initially championed by Snapchat, ephemeral content is also accessible on Twitter, Instagram, WhatsApp, YouTube, and TikTok, of course.

According to TechCrunch, the growth of video stories in 2018 was 15 times higher than traditional social media feeds. With millennials and Gen Z in love with the format, ephemeral video content offers an excellent opportunity for advertisers to reach followers. You can pick it up by making your video stories social, using polls to gain feedback from your viewers.

Brands will show some credibility by going online. The viewer understands that this is an uncertain project with certain inherent risks. Choosing to show a live video shows the followers that the company is transparent, truthful, and able to portray itself as it is — warts and all.

Live video is by no means an innovation, but has seen a steady year-on-year rise. In Wyzowl ‘s view:

Live videos are a unique and effective way to communicate with your audience and deepen the relationship between your brand and its followers.

Notwithstanding authenticity, successful and engaging live videos are becoming increasingly sophisticated. There were days when chatting in front of a webcam was enough. Higher quality standards, using numerous cameras and professional audio equipment, have become the standard.

Gen Z spends three times as much time shopping on social media sites than the average online user. The vast majority of online shopping is conducted on visual sites such as Instagram and Snapchat. 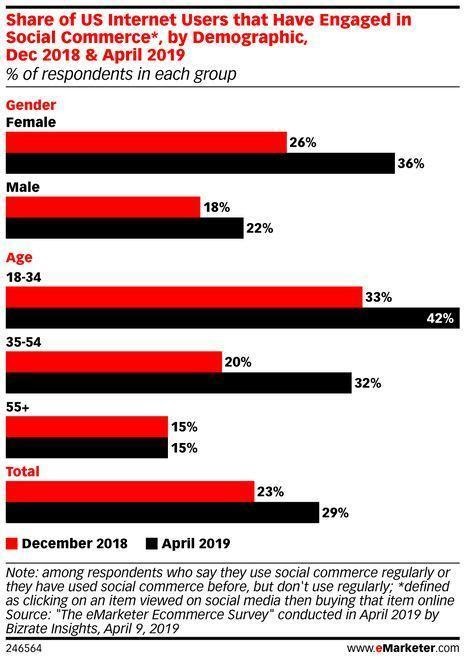 In reality, it was just a matter of time before social media and e-commerce came together, and 2020 could be a landmark year for social trade. Research shows that 42 % of people between the ages of 18 and 34 reported using social exchange on a regular basis.

When online shoppers are able to purchase items directly from their social media accounts, they provide much better user experience, particularly on mobile devices. We ‘re sure to see more social trade emerge over the next year, as e-commerce companies aim to leverage the strategy to create a smoother customer journey that drives sales and customer satisfaction.

A few years ago, the idea of customer service chatbots appeared far-fetched. The idea that consumers might actually want to connect with a chatbot instead of a human was even more difficult to believe.

In 2020, chatbots are much smarter and quicker, as advances in AI technology have turned the app into a real asset that can enhance any enterprise. Find the following figures from 2019:

AI chatbots don’t need breaks and don’t get overloaded by several clients at the same time. When technology advances, more businesses will embrace it as part of their social media strategies.

CEOs and Executives on Social Media

They expect to see an increasing number of CEOs and top executives becoming publicly involved in social media with accountability, accessibility and trust to remain a key company in the near future. In 2014, only 39% of Fortune 500 head officers had any social media activity, according to a survey by Domo and CEO.com. Many who neglect or do not use social media today lose a competitive edge.

CEOs who are accessible, demonstrate leadership and are interested in getting feedback from their customers (both good and bad) go a long way towards building goodwill and improving the company’s overall reputation.

Dataconomy has published a ranking of top CEOs based on social media sentiment. The top executives, derived from Forbes, Harvard Business Review, and Fortune lists, had to have at least 40,000 tweets about them over the course of 12 months. The Twitter data was used to find out how the general public feels about them.

“The top three executives, Brian Chesky (Airbnb), John Legere (T-Mobile) and Marc Benioff (Salesforce), were viewed positively as leaders of successful companies, but more interestingly as accessible communicators who have shown leadership on social and political issues,” said Jean-Pierre Kloppers, CEO of BrandsEye, an opinion-mining company that analyzed the data for the re-engineering.

The success of top-ranked Brian Chesky is partly attributable to his frequent public interactions on Twitter. He also won favour by tweeting that Airbnb would provide free housing for anyone stranded by President Trump ‘s 2018 travel ban.

Salesforce’s Marc Benioff, who is third, also made a distinction by asserting himself on political and social issues, namely his opposition to the proposed discriminatory LGBT law in Texas. Half of John Legere ‘s tweets are direct responses to customer questions and complaints, making him the most accessible CEO on the list. Another highly connected CEO in 2020 is Elon Musk, who is never too shy to let the world know what he’s doing with Tesla.

It’s clear now that the influencers are not going anywhere. Millennials were the birthplace of the YouTube star, and Gen Z is making the marketing influencer a full-fledged – and very lucrative – career path for the future.

In 2020, 59% of marketers are planning to increase their influencer budget by leveraging the reach and persuasive powers of relatable people with dedicated niche audiences. Interestingly, it is the micro-influencers with 10,000-100,000 fans that should benefit the most, as many small businesses choose to partner with these individuals rather than bust the budget for celebrity endorsements.

One potential challenge is the news that Instagram has started hiding likes, which could pose a problem for micro-influencers trying to get noticed in 2020. However, influencer marketing remains an integral part of modern social media, and as social trade and video stories rise, so will the influencer marketing industry.

We have seen TikTok boom to 1.5B in 2019, shaking all assumptions about the invincibility of the top network. Instead of conventional social media on Facebook and text messages, younger millennials favour video, immersive content and ARs like Snapchat and TikTok.

To retain the edge of business in 2020, marketing departments must keep up with social media trends and embrace new concepts and innovations such as social networking and AR.

The word Affiliate marketing is the combination of two words Affiliate and market. AFFILIATE AFFILIATE is the ability to cause a group to become part of...
Read more
Social Media

Do you find it exhausting to manage multiple social media accounts for your business on a daily basis? Whether you are a small business owner...
Read more
Content Marketing

How To Increase SnapChat Views And Followers

Views on Snapchat can be extremely beneficial to your brand. Snapchat has 186 million users on average per day, and these users create 3...
Read more

We all are aware that the marketing trends in today’s era are changing at a very fast pace and the market has drifted from...
Read more

How To Stay On Top Of Current Marketing Trend

The term trend is a general direction in which something is changing, developing, invoking, fashion, craze, or veering toward. In the world of business, a...
Read more

The word Affiliate marketing is the combination of two words Affiliate and market. AFFILIATE AFFILIATE is the ability to cause a group to become part of...
Read more

Do you find it exhausting to manage multiple social media accounts for your business on a daily basis? Whether you are a small business owner...
Read more
Load more

We all are aware that the marketing trends in today’s era are changing at a very fast pace and the market has drifted from...
Read more

How To Stay On Top Of Current Marketing Trend

The term trend is a general direction in which something is changing, developing, invoking, fashion, craze, or veering toward. In the world of business, a...
Read more

The word Affiliate marketing is the combination of two words Affiliate and market. AFFILIATE AFFILIATE is the ability to cause a group to become part of...
Read more

I can say with confidence — I’m not the only one who have told you that content is important. In the marketing...
Read more

Videos as Part of your Digital Marketing Strategy

If you are not currently using video as part of your of digital marketing strategy, then you need to start having a...
Read more

How to Nurture Leads at Each Stage of the Sales Funnel

Gathering leads is important in marketing, and what you do with those leads is even more important. Companies that followed up within...
Read more

A digital marketing blog with a concentration on lead generation and sales. We position our clients for success through social media management services, social media advertising services, website design, and content marketing.

How to Run a Successful Social Advertising Campaign